A DAZZLING TOUR DE FORCE
Look no further if you desire a comprehensive catalog of the Mediterranean’s historic and artistic riches, from the statuary of Greece and loggias of Italy to the cathedrals of Spain and the opulent villas of the French Riviera.

Embark 1 PM - Depart 9 PM
Climb up the magnificent Acropolis and stand in awe of the Parthenon, the beautiful temples and the view over Athens stretched out before you. See city highlights including the new and old Olympic stadiums. Journey to Cape Sounion and the temple of Poseidon overlooking the sea, or visit ancient Corinth and the narrow Corinth Canal cut through miles of solid rock.

Arrive 8 AM - Depart 11 PM
Enjoy wandering through the narrow, winding streets of this delightful seaside village with its whitewashed houses, flowers and brightly painted shutters and doors. Stand beneath the windmills on the hill. Visit the archaeological museum and an old bakery still using a 15th century wood-burning stove.

Arrive 8 AM - Depart 11 PM
Meander through the ruins of ancient Ephesus and marvel at the famed Library of Celsus, the huge amphitheater, the marble roads with their chariot marks, the amazing mosaic sidewalks and the superb, rarely opened Terrace Houses. Or journey to three monumental cities of antiquity - Priene, Miletus and Didyma - renowned for their majestic temples and impressive, beautifully preserved stadiums.

Arrive 8 AM - Depart 7 PM
Since John the Apostle wrote the Book of Revelations here, Patmos - the "Jerusalem of the Aegean" - is hallowed ground, with hundreds of churches that attest to the fact. One of the island's chief attractions is the Cave of the Apocalypse, where St. John is said to have lived during his exile. The other is the Monastery of St. John, adorned with frescoes dating back to the 12th century. Some of the more popular secular activities revolve around the island's lovely beaches shaded by tamarisk trees and walking Patmos' many country trails, which are often donkey paths.

Arrive 8 AM - Depart 6 PM
Turkey's most notable beach resort, Marmaris has a chic and tony 'Riviera' feel to it. An elegant, palm-lined promenade weaves its way around the shoreline, while the marina plays host to a flotilla of gleaming white yachts. Ancient and natural history are served up in Dalyan or discover a Turkish tradition with a visit to a hammam or Turkish bath.

Arrive 10 AM - Depart 7 PM
Chania wears its past on its sleeve. Spend the day in museums, from those uncovering the ancient history buried beneath the rocky soil to those celebrating Greece’s magnificent maritime history and the region’s unique folklore. Visit the ruins of the city-state of Aptera, a powerhouse in Minoan and Hellenistic times and eventually a Roman stronghold.

Arrive 8 AM - Depart 6 PM
Visit ancient Olympia where the Olympic Games began in 776 B.C. and stroll around this deserted sanctuary, admiring the temples, altars and treasuries, and stand on the ground where ancient athletes practiced before competing. Or enjoy a pleasant drive through the countryside past quaint villages to a local vineyard and sample the wines, local cheeses and other foods.

Arrive 8 AM - Depart 6 PM
Immerse yourself in this island of glorious scenery and beaches, serene monasteries, beautiful palaces, traditional mountain towns and Corfu's lovely old Venetian quarter. Or visit the ornate Achilleion Palace, built by Empress Sissi of Austria and filled with dramatic sculptures of the Greek hero Achilles.

Arrive 8 AM - Depart 3 PM
Enjoy a walk through this famous walled medieval city and its exquisite Venetian monuments. See the Franciscan monastery and explore the Rector's palace and the cathedral. Or explore the countryside with a visit to lovely Cavtat, an enchanting seaside resort that began life as a Greek and then Roman colony. Then visit a local family in a Konavle Valley village and enjoy their hospitality over a traditional welcome of brandy and figs with a serenade by local musicians.

Arrive 9 AM - Depart 8 PM
Once the western capital of the Roman Empire, Ravenna boasts an incredible eight UNESCO World Heritage Sites, most of them early Christian mosaics. The oldest, most breathtaking mosaics are in the Mausoleum of Galla Placidia. The tomb of the revered Italian poet Dante within the Dante Museum is also well worth a visit.

Arrive 8 AM - Depart 8 PM
The principal seaport and third largest city in Croatia, Rijeka charms with its Habsburg grandeur and multitude of cultural offerings. For marvelous views of the city and the surrounding river valley, visit the 13th-century Trsat Castle and explore its bastions and ramparts. Take a stroll along the Korzo, the city’s main promenade, which showcases the full splendor of its Austro-Hungarian architecture and rich history, including the distinctive City Tower. Pause at St. Vitus’ Cathedral, which was modeled after the famous Venetian church of Santa Maria della Salute and is the only Baroque rotunda of monumental proportions in Croatia.

Arrive 8 AM
Savor the majestic beauty of this amazing city as you glide along its canals and under its bridges, opulent palazzi and elegant churches lining the route. Discover Venice's secret quarters down narrow alleys opening into spacious campos. Admire the Doge's Palace and St. Mark's Basilica. Visit lovely Burano and the glass factories on Murano. Or enjoy the scenic countryside with its stunning Palladian villas.

Arrive 8 AM - Depart 6 PM
Savor the majestic beauty of this amazing city as you glide along its canals and under its bridges, opulent palazzi and elegant churches lining the route. Discover Venice's secret quarters down narrow alleys opening into spacious campos. Admire the Doge's Palace and St. Mark's Basilica. Visit lovely Burano and the glass factories on Murano. Or enjoy the scenic countryside with its stunning Palladian villas.

Arrive 9 AM - Depart 6 PM
Sometime around 300 A.D., Roman Emperor Diocletian built his retirement palace on one of the loveliest spots on the Adriatic Sea. Today his palace has become a UNESCO World Heritage Site in the heart of Split, the city that grew up around it. Split is now Croatia's second largest city, and much of it sits on a beautiful peninsula on the island of Ciovo, a jewel on the Dalmatian Coast. Many intriguing relics from the Roman, Greek colonial and Medieval periods can be found in Split's archaeological museum, which was founded in 1820, making it Croatia's oldest museum. One of the top outdoor attractions is the green oasis of Marjan Forest Park with its Split Zoo. There are also plenty of fine beaches nearby.

May 15 Cruising the Ionian Sea

Arrive 7 AM - Depart 5 PM
The greatest Greek city and most beautiful of them all,” is how Cicero described Syracuse, once the largest city in the ancient world. Travel back in time on the island of Ortygia, where Syracuse was founded by the Greeks in 734 BC. Nearly 3,000 years later, this UNESCO site is one of Sicily’s greatest archaeological treasures. In between spectacular ancient relics, treat your palate to cheese, olives and cured meats from street vendors or delicious gelato from a gelateria. Looming in the distance is Sicily’s most famous attraction, Mount Etna, which nourishes the rich soils that produce some of the best wines, fruits and nuts in the world.

Arrive 8 AM - Depart 6 PM
Beautiful Capri, with its stunning panoramas, villages, charming piazzas and the Villa San Michele, makes a nice diversion. Visit the ruins at Pompeii, take a cooking lesson in Sorrento or travel to the frenetic city of Naples and learn to make pizzas as the Neapolitans do.

Arrive 8 AM - Depart 8 PM
Travel to Rome and revel in the magnificent monuments, from the ancient Roman Forum and Coliseum to the splendor of St. Peter's Basilica with Michelangelo's Pietà and his breathtaking frescoes in the Sistine Chapel. Or enjoy a drive through the lush farmlands of the Roman countryside to lovely medieval Castelgandolfo.

Arrive 8 AM - Depart 7 PM
Drive along the famous Grand Corniche with its stunning views of Monaco and the Old City; then stroll through this marvelous quarter and its pink Grimaldi Palace. And don't forget the Casino. Explore the wonderful old villages along the Côte d'Azur from Nice to medieval Eze or Cannes, Grasse and lovely St. Paul de Vence - each one a jewel to be savored.

Arrive 8 AM - Depart 7 PM
See the sights and enjoy the views of historic old Marseille and visit the charming fishing port of Cassis. Or venture into the celebrated Provençal countryside with its fields of lavender and sunflowers. Explore lovely Aix or stroll through Avignon and its Papal Palace and the hilltop village of Les Baux.

Arrive 8 AM - Depart 6 PM
Located on the eastern shores of Spain’s Costa Brava, Palamos is a small and walkable city with beautiful beaches and a lovely promenade lined with restaurants and cafés. Learn about the history and the art of fishing at the popular Fishing Museum. Travel outside the city to visit the renowned Dali Museum, where the museum itself is as much of an attraction as the works of Salvador Dali that adorn its walls.

Arrive 8 AM - Depart 6 PM
Explore this beautiful island beginning with the magnificent Seo Cathedral and Bellver Castle. See the windmills and impressive manor house in the verdant countryside. Discover the amazing natural wonders in the Drach Caves. And for romance, visit the former Carthusian monastery in Valldemosa, where George Sand and Chopin spent a winter.

Disembark 8 AM
Visit the magnificent Gothic cathedral and the amazing La Sagrada Familia, Antoni Gaudí's unfinished masterpiece. Enjoy the lovely Montjuic Gardens, Gaudí's other fabulous structures, the charming squares of the old Gothic Quarter and the Ramblas, Barcelona's famed downtown promenade. Or visit beautiful Montserrat and its monastery in a breathtaking setting high in the mountains.

For further information on this or any other packages please Call us on 1300 968 787or mail info@yourholidays.com.au 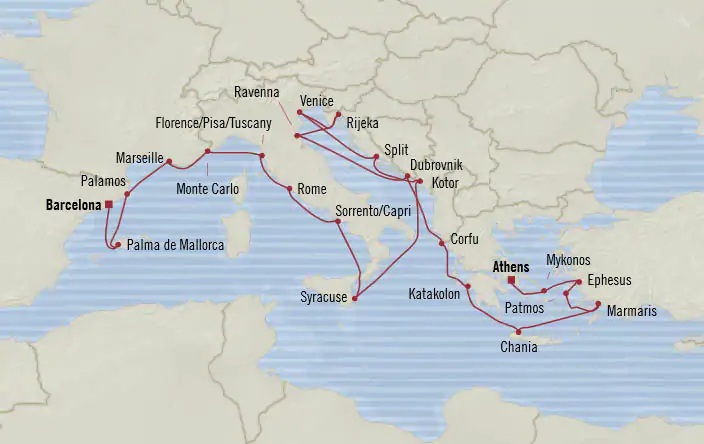 Portraits of Eastern Europe with Uniworld