SPRINGTIME IN ANTIQUITY
Delight in the juxtaposition of historical jewels and springtime blooms in Italy and the Adriatic, discovering how these charming towns evolved from a shared Greco-Roman heritage into the breathtakingly unique destinations they are today.

Embark 1 PM - Depart 6 PM
Travel to Rome and revel in the magnificent monuments, from the ancient Roman Forum and Coliseum to the splendor of St. Peter's Basilica with Michelangelo's Pietà and his breathtaking frescoes in the Sistine Chapel. Or enjoy a drive through the lush farmlands of the Roman countryside to lovely medieval Castelgandolfo.

Arrive 8 AM - Depart 7 PM
Destroyed by an earthquake in the 17th century, Catania has been beautifully restored and offers ancient churches, castles and amphitheaters, lush gardens and lovely palazzos to explore. Tour the 13th century Ursino Castle, which was situated along the coast until earthquakes and volcanic eruptions transformed the landscape. Drive inland through picturesque villages and explore Villa Romana del Casale, a 4th century villa and UNESCO World Heritage Site containing a complex collection of Roman mosaics considered one of the finest in the Roman world.

Arrive 7 AM - Depart 3 PM
Discover the myriad of cultural layers of Malta, from its amazing prehistoric temples at Tarxien to beautiful walled medieval Mdina, nearby Rabat, and Marsaxlokk, a colorful fishing village. Admire the stunning scenery and wander through imposing churches and down the streets of fortified towns where the Knights of St. John once held sway.

Arrive 8 AM - Depart 6 PM
Sometime around 300 A.D., Roman Emperor Diocletian built his retirement palace on one of the loveliest spots on the Adriatic Sea. Today his palace has become a UNESCO World Heritage Site in the heart of Split, the city that grew up around it. Split is now Croatia's second largest city, and much of it sits on a beautiful peninsula on the island of Ciovo, a jewel on the Dalmatian Coast. Many intriguing relics from the Roman, Greek colonial and Medieval periods can be found in Split's archaeological museum, which was founded in 1820, making it Croatia's oldest museum. One of the top outdoor attractions is the green oasis of Marjan Forest Park with its Split Zoo. There are also plenty of fine beaches nearby.

Arrive 8 AM - Depart 9 PM
Once the western capital of the Roman Empire, Ravenna boasts an incredible eight UNESCO World Heritage Sites, most of them early Christian mosaics. The oldest, most breathtaking mosaics are in the Mausoleum of Galla Placidia. The tomb of the revered Italian poet Dante within the Dante Museum is also well worth a visit.

Arrive 8 AM - Depart 8 PM
Originally built on an island surrounded by swampland that was later drained, Koper was known as "Goat's Island" when it was under Venetian rule. Today the once fortified Old Town of Venetian-influenced Koper has retained much of its grand architecture from the 15th to 18th centuries. The Praetor's Palace, a blend of Gothic and Renaissance styles, proudly rises above the gray limestone main square. Nearby the Postojna Caves are the most popular underground attraction in Europe, and the Predjama Castle was carved out of a limestone cliff.

Arrive 8 AM
Savor the majestic beauty of this amazing city as you glide along its canals and under its bridges, opulent palazzi and elegant churches lining the route. Discover Venice's secret quarters down narrow alleys opening into spacious campos. Admire the Doge's Palace and St. Mark's Basilica. Visit lovely Burano and the glass factories on Murano. Or enjoy the scenic countryside with its stunning Palladian villas.

Disembark 8 AM
Savor the majestic beauty of this amazing city as you glide along its canals and under its bridges, opulent palazzi and elegant churches lining the route. Discover Venice's secret quarters down narrow alleys opening into spacious campos. Admire the Doge's Palace and St. Mark's Basilica. Visit lovely Burano and the glass factories on Murano. Or enjoy the scenic countryside with its stunning Palladian villas.

For further information on this or any other packages please Call us on 1300 968 787 or mail info@yourholidays.com.au 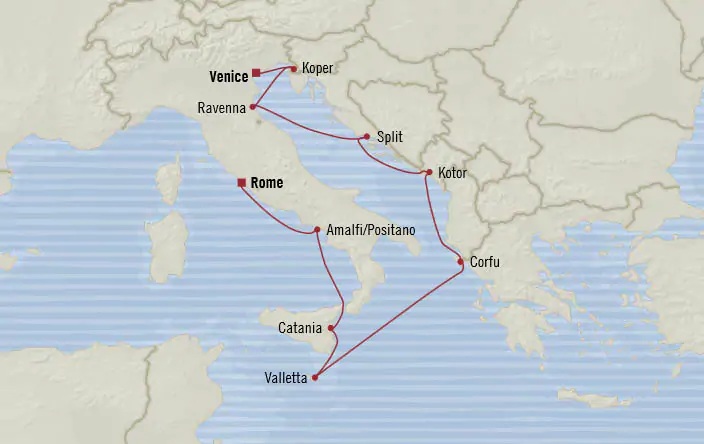 Passage Through Time with Oceania Cruises