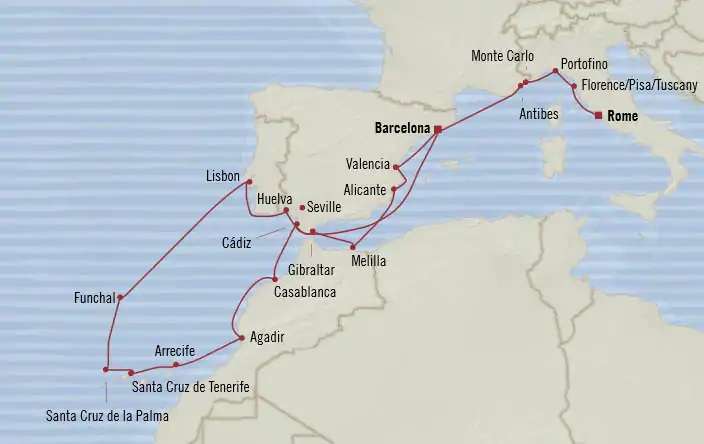 SEAS BECOME OCEANS
Indulge in a remarkable range of experiences on a voyage of wanderlust that combines the Western Mediterranean’s sophisticated ports with the idyllic European islands of the Atlantic and Morocco’s enigmatic ports.

Embark 1 PM - Depart 7 PM
Travel to Rome and revel in the magnificent monuments, from the ancient Roman Forum and Coliseum to the splendor of St. Peter's Basilica with Michelangelo's Pietà and his breathtaking frescoes in the Sistine Chapel. Or enjoy a drive through the lush farmlands of the Roman countryside to lovely medieval Castelgandolfo.

Arrive 8 AM - Depart 7 PM
Stroll through picturesque Portofino and Santa Margherita. Be awed by the stunning scenery as you explore the beautiful coastal resorts of Ravello, Sestri Levante or San Fruttuoso by local boat and on foot.

Arrive 8 AM - Depart 11 PM
Drive along the famous Grand Corniche with its stunning views of Monaco and the Old City; then stroll through this marvelous quarter and its pink Grimaldi Palace. And don't forget the Casino. Explore the wonderful old villages along the Côte d'Azur from Nice to medieval Eze or Cannes, Grasse and lovely St. Paul de Vence - each one a jewel to be savored.

Arrive 7 AM - Depart 5 PM
Beaches and beauty abound in this stunning coastal city. Head to the Picasso Museum to see where he lived and painted and then stretch out on the beaches of Juan-les-Pins. The covered market, Marché Provençal, presents a selection of local cheeses, while an invigorating walk around Cap d’Antibes is a romantic’s dream.

Arrive 9 AM
Visit the magnificent Gothic cathedral and the amazing La Sagrada Familia, Antoni Gaudí's unfinished masterpiece. Enjoy the lovely Montjuic Gardens, Gaudí's other fabulous structures, the charming squares of the old Gothic Quarter and the Ramblas, Barcelona's famed downtown promenade. Or visit beautiful Montserrat and its monastery in a breathtaking setting high in the mountains.

Arrive 8 PM
Visit the magnificent Gothic cathedral and the amazing La Sagrada Familia, Antoni Gaudí's unfinished masterpiece. Enjoy the lovely Montjuic Gardens, Gaudí's other fabulous structures, the charming squares of the old Gothic Quarter and the Ramblas, Barcelona's famed downtown promenade. Or visit beautiful Montserrat and its monastery in a breathtaking setting high in the mountains.

Arrive 8 AM - Depart 6 PM
The City of Arts and Sciences is an impressive collection of attractions, including an opera house and performing arts center, IMAX cinema, planetarium, science museum and oceanographic park. Visit the Gothic city of Requena, featuring perfectly preserved 100-year-old wine cellars. In Lladró's City of Porcelain museum, explore the production facilities, or nearby visit the National Ceramics Museum, located in the former palace of nobility.

Arrive 8 AM - Depart 6 PM
Lying on Spain's radiant Costa Blanca, Alicante exudes a rare beauty. Lovely Baroque buildings cluster around the historic central district. Marble plazas grace its broad waterfront boulevard, the illustrious Explanada de España. Pristine beaches like San Juan hug the shoreline. It's no surprise that Alicante is popular year-round. Venture to the grand Castle of Santa Barbara overlooking the city and walk from its high towers down into the dungeon. Stop for a glass of refreshing sangria in the Old Quarter. Behold the masterpieces hanging in the Gravina Museum of Fine Arts, a former 18th century palace.

Arrive 9 AM - Depart 7 PM
Appreciate the unique nature of graceful Melilla, an autonomous Spanish city on the African coast carved out of Morocco. Soak up the Triángulo del Oro district’s stylish architecture, which outside of Barcelona showcases Spain’s largest collection of modernisme buildings, the architectural style epitomized by Antoni Gaudí. In fortified Old Melilla, stroll cobbled lanes sandwiched between defensive walls and step into the Cuevas des Coventico, natural caves used as a hiding place throughout the ages. Witness the city’s captivating mix of cultures at the Mercadillo de Melilla, where savvy shoppers throng in search of colorful Moroccan goods.

Arrive 8 AM Depart 9 PM
Go to the top of the Rock and admire the view across the Mediterranean and up the peninsula into Spain. Feed peanuts to the famed Barbary Apes and visit St. Michael's Cave, a fascinating cavern once lived in by Neolithic peoples and visited by early Romans. See the quaint fishing village along the coast and enjoy the colorful town.

Arrive 7 AM - Depart 5 PM
Inhabited since 3000 BC, Huelva has seen its share of visitors over the centuries, having been ruled by Romans and Arabs in the past. Now it is a traditional Andalusian town in the south of Spain, known for delicious food, a relaxed vibe and the nearby Punta Umbría beach, where wooden walkways provide access to the well-maintained nature area for both pedestrians and cyclists.

May 25 Tue Cruising the Atlantic Ocean

Arrive 8 AM - Depart 5 PM
Breathtaking vistas await throughout this beautiful island. Take a cable car up to Monte for spectacular views of the botanical gardens and the charming town. Drive along the coast to a village where Winston Churchill painted seascapes or out to the stunning cliffs of Cabo Girão and enjoy a visit to a quaint fishing village.

Arrive 9 AM - Depart 7 PM
Stroll along Calle O'Daly, the pedestrian district named after an Irish banana merchant and lined with historic residences. Visit the Town Hall and the church, Iglesia del Salvador, both of the 16th century. There is an interesting museum of natural science as well as a naval museum.

Arrive 8 AM - Depart 9 PM
Volcanic in origin, Tenerife is the largest of the Canary Islands. While in port, you'll notice the Auditorium of Tenerife, an amazing, organic structure that instantly became an icon when completed in 2003. Another modern landmark is the Oscar Domínguez Institute, a contemporary art gallery named after the 20th century surrealist. For a respite from the urban environment, visit the Palmetum, a botanical garden with more than 400 species of palms.

Arrive 8 AM - Depart 5 PM
Soft breezes caress this small volcanic island just 79 miles off the west coast of Africa. A land of contrasts: you can explore some of the world's most spectacular caves in the morning and relax on a white sand beach in the afternoon.

Arrive 7 AM - Depart 5 PM
Visit the 16th century kasbah atop the hill with its expansive views over the Atlantic, the new city and the beaches. Visit a Berber village and stroll through its alleys and browse in its souks. Or head off towards the Souss Valley with the Atlas Mountains as a backdrop to Taroudant, an ancient fortress town.

Arrive 9 AM - Depart 6 PM
Stroll through the narrow streets of the old medina and visit the spice market. Admire the Hassan II Mosque built beside the sea. Or journey inland to Rabat, a fascinating old city of kasbahs, souks and Moroccan tradition.

Arrive 8 AM - Depart 6 PM
Spend a fabulous day in Seville visiting the magnificent cathedral, climbing the famed Giralda Tower and strolling through the gorgeous Alcazar and its gardens. See the ceramic-encrusted Plaza de España and stroll through the alleys of Barrio de Santa Cruz. Or explore the Andalusian wine country and Jerez, the home of sherry. Don't miss the charm of Cádiz with its gracious squares, its flower-filled parks on the city bastions and its bustling markets.

For further information on this or any other packages please Call us on 1300 968 787or mail info@yourholidays.com.au

Portraits of Eastern Europe with Uniworld