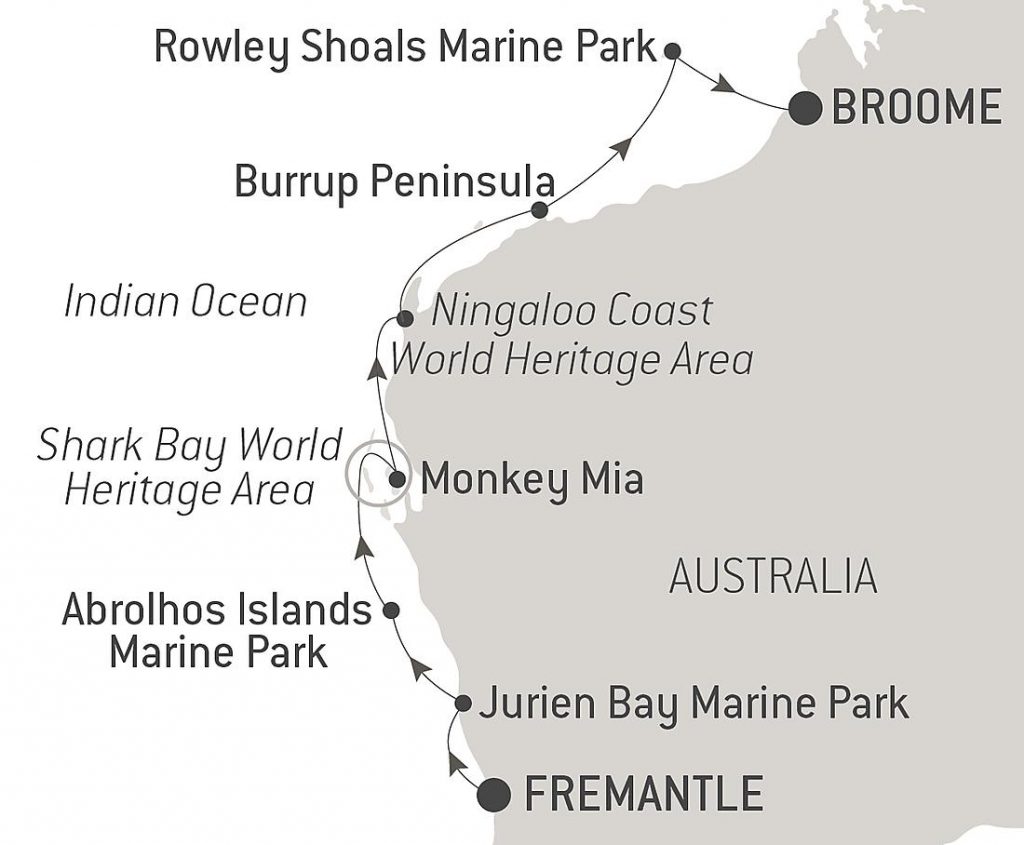 The vibrant city of Fremantle blends the old with the new, creating an enriching cultural experience. Maritime, convict and colonial history can be explored in one of the best-preserved examples of a 19th century port streetscape on Earth, while buzzing markets, lively bars and casual street cafés give you a taste of 21st century life with the locals. If you're hitting the heritage trail, be sure to include a visit to the Western Australian Maritime Museum, World Heritage listed Fremantle Prison and Western Australia's oldest public building, the Roundhouse.

Jurien Bay Marine Park located 150 kilometres north of Perth, was named by Captain Nicolas Baudin aboard the Géographe in honour of the French naval administrator Charles Marie Vicomte Jurien. The marine park surrounds dozens of ecologically important islands that contain rare and endangered animals found nowhere else in the world. The marine park and its immediate surrounds is the only major breeding area for Australian sea lions along the western coast of Australia. It is also a primary breeding ground for seabirds and is populated with a mix of temperate and tropical plants and animals, courtesy of the Leeuwin Current.

The Abrolhos Islands Maine Park consists of three main clusters of islands that stretch from north to south across 100 kilometres of ocean, and includes the Wallabi Group, Easter Group and Pelsaert Group. Established as a marine park in 1983, the waters of the Abrolhos are famous for colourful coral, crystal clear waters and large breeding colonies of seabirds. Here, the southward flowing Leeuwin current has created a meeting place for tropical and temperate sea life. In July 2019 the Islands were declared a national park for their ecological and historical significance. You will have the opportunity to explore East Wallabi Island and its fringing reefs.

With its white, sandy beaches, turquoise waters, rust-red sand dunes and abundant wildlife, Shark Bay became Western Australia’s first Wold Heritage listed area in 1991. The colourful and diverse landscapes, rare fauna and flora and world class examples of Earth’s ecological processes are what qualify Shark Bay for World Heritage listing – making it a truly remarkable place. You will have the opportunity to sail past the location of the first recorded European landing on Australia’s west coast at Cape Inscription where in 1616 Dirk Hartog left evidence of his landing in the form of a pewter plate inscribed with details of his journey.

Over 70% of the Shark Bay World Heritage Area is marine environments and many of the reasons for its World Heritage listing are within these waters. The shallow and mostly protected bays host over 10,000 dugongs; the world’s largest seagrass beds; and representatives of the earth’s oldest lifeforms, stromatolites. Wild bottlenose dolphins visit the shore at Monkey Mia Reserve, creating one of Australia's best-known wildlife experiences. You may also see sharks, rays, turtles and a variety of fish in the water. You will have the opportunity to experience the wild bottlenose dolphins early in the morning before exploring the area’s natural and cultural history along the Wulyibidi Yaninyina trail.

The Ningaloo Coast Marine Park is a place of spectacular contrast between lush and colourful scenery beneath the surface of the Indian Ocean and the rugged, arid landscape of Cape Range National Park. Here is also only one of few places on Earth where you can see the biggest fish in the ocean - the whale shark. Our voyage will occur during the peak viewing season, maximising our opportunity to encounter these amazing giants of the sea. You will also have the opportunity to swim and snorkel on the largest fringing coral reef in Australia and the only large reef in the world found so close to a continental land mass, making it an easy snorkel from shore.

Murujuga National Park and the islands of the Dampier Archipelago showcase what is thought to be the highest concentration of rock engravings of any known site in the world. Aboriginal people have been living there for more than 50,000 years and the petroglyphs (rock engravings) have been estimated to be as old as 40,000 years. The petroglyphs are diverse, depicting a record of what was meaningful to the Aboriginal people of the Pilbara and beyond. The sacred rock art’s traditional custodians are the Ngarluma-Yindjibarndi, the Yaburara-Mardudhunera and the Woon-goo-tt-oo and you will have the opportunity to visit Deep Gorge with a traditional custodian guide and marvel at the petroglyphs up close.

Regarded as one of the world’s most spectacular diving and snorkelling locations, the Rowley Shoals lie 260 kilometres west of Broome in the Timor Sea. The three coral atolls of Mermaid, Clerke and Imperieuse reefs rise, near vertical, from the surrounding crystal-clear waters on the edge of the continental shelf. The shallow lagoons inhabited by a diverse array of corals and abundant marine life are ideal for exploration by snorkellers and divers. To take full advantage of the location, your ship will spend one and a half days at the Rowley Shoals, allowing you to swim and snorkel from Zodiac®.

Located in the northwest of the Kimberley region and in the far north of Western Australia, the town of Broome is reputed for its history and its glorious pearling era. The fascinating Chinatown district, which is the historic city centre, and the famous Japanese Cemetery, dates back to 1896, and has a past marked by the immigration of numerous Chinese and Japanese workers, attracted by the prosperous pearl industry at the end of the 19th century and at the beginning of the 20th century. Broome is also famous for the “Staircase to the Moon”, an optical illusion created by the Moon reflecting on the sand banks at low tide, like a staircase climbing up towards the sky, a unique spectacle provided by nature

Passport valid for at least six (6) months beyond the completion of your trip. Passport must contain at least two completely clear, blank, unused visa pages for each visa required, not including any amendment pages. Visa pages with stains or ink from other pages in the passport are not usable. Guests who deviate from the scheduled embarkation or disembarkation port should research the foreign entry requirements for the port country. Due to government regulations, regrettably, Ponant will have to deny boarding to any guest who fails to obtain the appropriate travel documentation for this trip.

The information below is current but subject to change at any time without advance notice from government authorities. Please consult your respective government agencies for visa and health information.

Australia: an Electronic Travel Authority (ETA) must be obtained before your arrival in Australia. For more information, please visit www.australia.gov.au/information-and-services/immigration-and-visas. Carriers should be aware that there will not be any physical evidence in your passport. A copy of your ETA must be sent to PONANT at the latest 45 days prior to your cruise date. We also ask you to keep a copy of your ETA and keep it with your passport throughout the duration of your trip.

Australian customs regulations are very strict, especially for the import of food items such as fresh food (even sealed), fruits, eggs, meat, plants, vegetables, seeds, grains. Fur and feathers are also forbidden. We highly recommend you consult this website for further details : www.australia.gov.au/information-and-services/immigration-and-visas/customs-clearance.

It is recommended that you contact your health professional for any specific medical advise relating to travel through these regions, including advice on Malaria prevention and dengue fever.

Warning about the use of drones: the use of drones aboard PONANT ships, whether they are sailing at sea, at a port of call or anchored, is strictly forbidden. The use of drones on land in the Arctic and Antarctic regions is also strictly forbidden by international polar regulations. In other regions, it may be possible to use drones on land if permission has been obtained from the relevant authorities of each country and each region travelled through, as well as a pilot’s licence that should be obtained from your home country. Passengers are responsible for obtaining these permits; they should be able to present them at all times. Passengers who do not obtain these authorisations expose themselves to the risk of legal proceedings.

For your serenity, PONANT organises your transfer between the port and the airport. This package is included in your cruise fare.

Meet and greet at the port by our local representative, and group transfer from the port to your hotel or the airport.

For guests who have an afternoon flight, enjoy time at leisure in the town centre before your group transfer to the airport.

Expedition into the Java Sea with Crystal Cruises