This Peregrine journey takes you to one of the world’s most awe-inspiring destinations: Antarctica. Skip the often turbulent Drake Passage with return flights from Punta Arenas to King George Island. After making shore visits through the South Shetland Islands, arrive at the Antarctic Peninsula and be immediately dazzled by some of the most dramatic scenery to be found anywhere on earth. Sailing aboard your well-appointed expedition vessel, witness Antarctic nature in all its glory. These areas boast an extraordinary abundance of wildlife, including five species of seals and massive rookeries of gentoo, Adelie and chinstrap penguins. Observe magnificent whales in close proximity as they crest the surface of waves. Weather, ice and other mitigating factors may result in changes to your itinerary and alteration to certain shore excursions.

Prices are in Australian Dollars

Welcome to Chile. Your adventure begins in Punta Arenas, which is the most populated city in Patagonia. Please arrive by the early afternoon, so that you can be transferred from the airport to your hotel. This transfer is included in your voyage fare when arriving today only. If you arrive early, there are many museums, restaurants and shops to keep you busy. In the early afternoon your leaders will meet you at the hotel, where you’ll enjoy a welcome dinner and be briefed about embarkation day.

Special Information
An arrival transfer is included if you arrive today. Please arrive before 6.00pm so you are in time for the welcome briefing and to collect your boots and parka at the hotel. There will be an included welcome dinner at the hotel this evening.

In the morning take a charter-flight from Punta Arenas to Antarctica, crossing the great Drake Passage in only a few hours. Your first glimpse of Antarctic landscapes will be from above, as the plane descends for landing on King George Island. On landing, stretch your legs and spend a bit of time exploring the island before being transferred by Zodiac to your ship. Meet the rest of your shipmates and set sail for the Antarctic Peninsula


Notes: Luggage allowance for the charter flight is strictly limited to 15 kg for checked baggage and 5 kg for carry on.

As the ship approaches the White Continent, your captain and expedition team keep their eyes open for possible whale and seabird sightings. Over the next four days, the team of specialist lecturers aboard the ship will provide in-depth explanations of the geology, history and wildlife of the region. Your first Zodiac landing may see you walk on a beach teeming with thousands of penguins and seals, which is one of the most intimate ways to experience the unique wildlife of Antarctica.

CUVERVILLE ISLAND
A gentoo penguin rookery is situated on the north end of the island on a rocky beach. Depending on the time of season you arrive, you may see them building nests or attending to their chicks. Giant petrels and kelp gulls breed on the island.
DAMOY POINT
If you are lucky enough to mail a postcard in Antarctica, you’ll likely pass through Damoy Point, the northern entrance to the harbour on which Port Lockroy is located.
DANCO ISLAND
This small island, one mile (1.6 km) in length, is easy to explore and home to gentoo penguins. You can visit the marker of a former British Antarctic Survey hut and watch for a variety of seabirds such as snowy sheathbills, kelp gulls and blue-eyed shags.
ENTERPRISE ISLAND
Located in Wilhelmina Bay, the island was used by whalers. A Zodiac cruise around the island passes a wrecked whaling ship.
LEMAIRE CHANNEL
This strait runs between Booth Island and the Antarctic Peninsula; you’ll see that this is one of the most scenic locations on the western coast, especially during sunrise and sunset. The 6.8 mile-long (11 km) Channel may become
impassable when ice fills the narrow passageway, so we’ll hope for clear waters.
MELCHIOR ISLANDS
A group of low islands in Dallmann Bay, on which you may see male fur seals haul-out at the end of the breeding season to recuperate from their battles for supremacy.
NEKO HARBOUR
Little evidence remains that this bay was once used by the floating whale factory ship Neko. You might see some whale vertebrae used by resident gentoo penguins as shelter from the wind. There is an unmanned refuge hut here, erected by Argentina. Climb past the hut and up a steep slope for
spectacular views of the glacier-rimmed harbour.
PETERMANN ISLAND
Here, near the Lemaire Channel, you can stand ashore and see the southernmost breeding colony of gentoo penguins. The dome of the island rises 650 feet (200 meters) above the sea, offering a challenging hike for panoramic views. Adélie penguins, shags and south polar skuas also inhabit the island.
PORT LOCKROY
A ‘fun’ destination of sorts, we always strive to journey to Port Lockroy if weather permits. The harbour is on the west side of Wiencke Island. A secret base was built on the harbour during the Second World War as part of Operation Tabarin. It is now designated as a historic site, where Port Lockroy is a museum and post office. Proceeds from your purchases here support the preservation of historic sites from the Heroic Age of Exploration.
WATERBOAT POINT
Of historic interest, you may venture to this unique point, which at low tide is connected to the Antarctic mainland. Zodiacs are used to explore the area when the tide is in. Two scientists studying penguin behavior lived in a water boat on the Point from 1921-22. The remains of their camp have been
designated an Antarctic historic site.
AITCHO ISLANDS
This is a group of small islands, some still unnamed, situated in the northern entrance of English Strait. You can often spot a great mix of wildlife here, with gentoo and chinstrap penguins having established rookeries. Southern elephant and fur seals are frequently hauled-out here too.
BAILY HEAD
Also known as Rancho Point, this area is a rocky headland on the southeastern shore of Deception Island. Chinstrap penguins build nests on slopes leading to a high ridge that dominates the natural amphitheater and provides a superb setting for landscape photography.
HALF MOON ISLAND
This crescent-shaped island was known to sealers as early as 1821. Unlike sealers who liked to keep their best locations secret, we’re happy to bring you ashore on this impressive island. Many Antarctic birds breed here including chinstrap penguins, shags, Wilson’s storm-petrels, kelp gulls, snowy sheathbills, Antarctic terns and skua.
HANNAH POINT
Macaroni, chinstrap and gentoo penguin rookeries are located on the point, which is on the south coast of Livingston Island. Due to the rather congested area available to the nesting penguins, you can only visit here from January 10 onwards.
PENDULUM COVE
Hot geothermal waters are found along the shoreline of this cove, named for observations made in 1829 by a British expedition. You may see yellow algae and boiled krill floating on the surface because of the scalding hot water!
PENGUIN ISLAND
Antarctica has two flowering plants, both of which you can find on Penguin Island: Deschampsia antarctica and Colobanthus quitensis. Chinstrap penguins, fur seals and southern elephant seals use the island for breeding purposes.
ROBERT POINT
A nice spot for Zodiac cruising, this point was known to sealers as early as 1820. Chinstrap penguins, kelp gulls and pintado breed here, and whales may be seen in the surrounding waters.
TELEFON BAY
Your Expedition Team will be happy to point out that it is here where the most recent evidence of volcanic eruption on Deception Island can be seen.
TURRET POINT
Chinstrap and Adélie penguin rookeries are found on this point, situated on the south coast of King George Island. The beaches here are often crowded with southern elephant, fur, and Weddell seals hauled-out on the rocks.
WHALER’S BAY
To reach Whaler’s Bay it is necessary to sail through a narrow passage called Neptune’s Bellows. The bay was used by whalers from 1906 to 1931 and is part of a protected harbour created by a circular flooded caldera, known as Deception Island. Along with waddling penguins and lounging seals, you’ll see rusting remains of whaling operations on the beach. Watch for steam that may rise from geothermally heated water springs along the shoreline.
YANKEE HARBOUR
Gentoo penguins have established a rookery on this harbour, situated on the southwest side of Greenwich Island. Here you can see an abandoned Argentine refuge hut and a large glacier that stretches along the east and north sides of the bay. An abandoned sealing try pot is all that remains of the
activity that brought men thousands of miles in tall ships to seek their fortune.

The following Optional Activities are available to participate in, on some or all of the departures of this itinerary. These must be booked in advance (additional costs apply) and space is limited.
KAYAKING – Our kayaking adventures are the best way to feel at one with the sea. Taken in small groups of maximum 16 people, multiple times per voyage, kayaking adventures are only conducted during calm weather conditions. Kayaking is open to all levels of experience, however kayaking in the polar waters is not suitable for novice kayakers. Beginners interested in kayaking should first take an introductory course prior to the voyage which includes how to do a wet exit. In addition regardless of your experience, we recommend you take part in some kayaking practise prior to the voyage to ensure that you are comfortable on the water in the icy conditions.
Meals Included
Breakfast (4)
Lunch (4)
Dinner (4)

After your week of exploration, bid farewell to the expedition team and disembark at King George Island. From here, it’s a three-hour flight across the Drake Passage to Punta Arenas. After transferring from the airport to the hotel, you’re free to explore the town and perhaps enjoy one final dinner with the group.

After breakfast, you’re free to continue on your own travels or make your way to the Punta Arenas airport for your flight home. There are no activities planned for the final day and you're able to depart the accommodation at any time.

Special Information
No departure transfer is included, please make your own way to the airport for your onward travels. 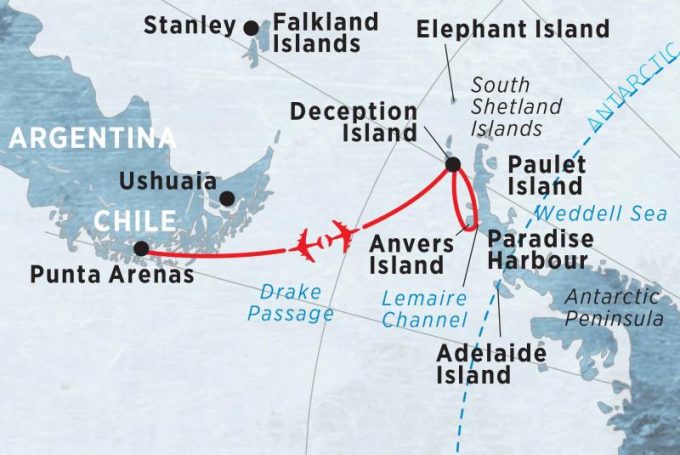 Antarctic Voyage With Spirit Of Peru

Antarctica in Depth with Scenic Eclipse